Stephan Machiels and Sabrina Brugmans, a great couple who really enhance the image of the pigeon sport. They also live in the region and were not allowed to take part in flights for several weeks due to bird flu. No flights for six weeks! “We started the season with provincial wins from Lorris and Argenton until bird flu threw a spanner in the works. It was very difficult for the boys who had just started the season. On the short-haul tours this was not a problem after the quarantine period, but when the medium-haul flights started they lacked competition and experience. However, that doesn't stop us from sticking with our system next season.

The Röhnfried products give our pigeons that certain something that lasts a long time and makes it easier for them to play at the top. The breeders have to be healthy all year round, which is why we use Avidress Plus in combination with Usne Gano. About three times a week we give Gervit-W as well as lots of fresh grit and salty treats. The birds are played only in their year of birth. Every year we start with a group of about 55 old and year old females divided into two compartments. There is an open aviary in front of each compartment because plenty of oxygen is very important. Initially we black them out until early May to calm them down but also to delay moulting. We prefer to use Röhnfried products, such as Hessechol, after the race, which promotes rapid regeneration. When it's hot and the pigeons have to fly more than 400km, they get Rotosal in Kombina every daytion with Carni Speed. I have the impression that the pigeons train harder that way. For the bronchi and to improve the climate in the loft, we steam the loft twice a week with Bio-Air Fresh.

We use a lot of Moorgold in combination with Entrobac for the boys. Both products act on the intestines and ensure good digestion, because the faeces are always very dry and round. The mixture of immune booster with Moorgold, or Entrobac, and the herbal mixture ensure that the droppings are always top-notch. Energy oil and condition powder Ro200 ensure that the pigeons have enough reserves and are in top form." 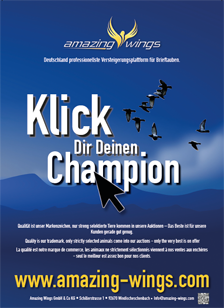